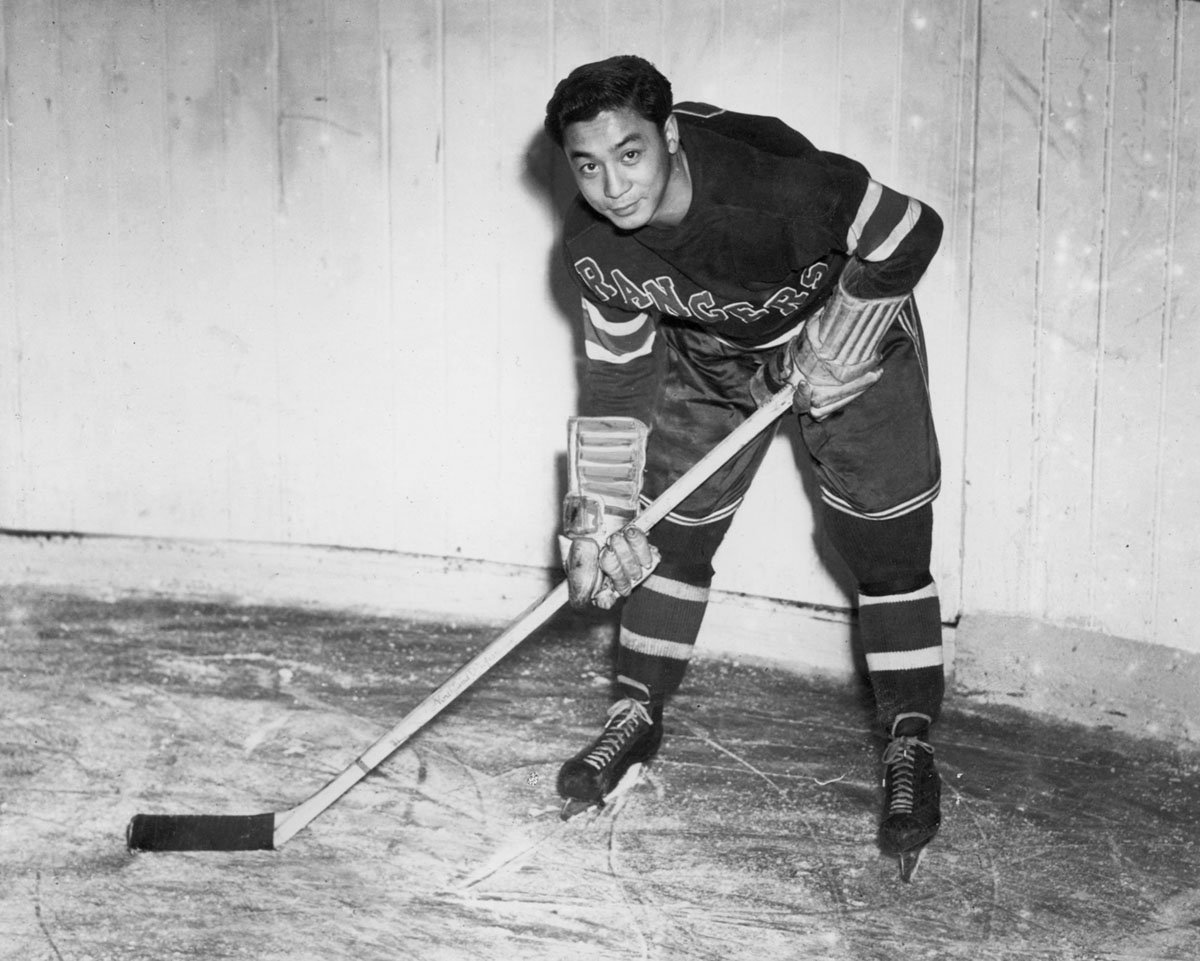 Larry Kwon, the first Asian Canadian to play in the NHL

Asian Canadians on the Ice

A week before the end of April, colour commentator Bruce MacDonald was calling a British Columbia Hockey League (BCHL) game between the ​​Alberni Valley Bulldogs and the Langley Rivermen.  Langley forward Owen Kim, who is of Asian descent and a talented player who is committed to play NCAA Division I hockey for Holy Cross, was in an altercation with an Alberni Valley player when MacDonald interjected on air:

“Oh, Kim . . .  give it a break. Get on a ladder and talk to him. Does he speak English? Maybe that’s the problem,” MacDonald was heard saying. He was immediately taken off-air and subsequently apologized, but once again, racism tarnished the Canadian national sport.

As Asian Heritage Month begins, there are now more Asian Canadian players starring in hockey. Players including Nick Suzuki, Jason Robertson, and Kailer Yamamoto are all enjoying successful NHL careers. Despite the success of these players, anti-Ascian racism in hockey still exists. Canadian-born and raised, playing the game most ascribed to Canadian identity, many players of colour, including Asian Canadians are still viewed as “not Canadian enough.”

Playing a single shift in the third period of a 1948 game for the New York Rangers, Larry Kwong made history as the first Asian Canadian to play in the NHL. He never stepped foot on NHL ice again.

Kwong is one of many Asian Canadian hockey players who saw their star dimmed by an onslaught of anti-Asian hate and racism. Players including Herb and Mel Wakabayashi and George Chin excelled on the ice but faced systemic barriers in the sport.

George Chin, a Chinese Canadian from Lucknow, Ontario, could have, and likely should have broken the NHL’s colour barrier four seasons before Kwong. He tried out for the Toronto Maple Leafs, and wowed scouts and media with his performance in training camp, but was returned to his hometown team. Chin answered by dominating scoresheets wherever he went, including as the star of the Michigan Wolverines, leading them to back-to-back National championships in 1952 and 1953.

Chin has gone, all but forgotten in Canadian hockey history, but his legacy remains. If not for George Chin, and his family, one of the most famous goals in Canadian hockey history may have never happened. In the basement of the Chin’s family restaurant in Lucknow, Ontario, a young boy named Paul Henderson learned to play the game. Henderson was gifted his first set of hockey equipment by the Chin family, who coached the future NHL star throughout minor hockey. On the frozen floor of their restaurant basement, Henderson worked on his skills alongside the Chin brothers. Decades later, Henderson suited up for the Toronto Maple Leafs, the same team that had denied George Chin a place in history, and went on to score the 1972 Summit Series clinching goal, helping Canada defeat the Soviet Union.

The BCHL commentator’s remarks demonstrate the same ideology Asian Canadian players have dealt with for a century. In the 1950s and 1960s, Herb Wakabayashi and Mel Wakabayashi, playing on a line with Black teammate Eddie Wright with the Chatham Maroons, were labelled the “International Line” despite the fact each was born in Canada. Herb and Mel were born in Japanese Internment camps after their parents were forcefully dispossed and interned during World War II. The brothers would advance to become all-American hockey players in the NCAA, Herb with Boston University, and Mel with the University of Michigan. Despite their talent, neither would earn a chance at the NHL level.

The BCHL took swift action, firing the commentator and denouncing his slurs. But this was not an isolated incident. In January, a player in the Island Junior Hockey League on Prince Edward Island was suspended for making a racist slur aimed at a player of Asian descent in a game between the Kensington Vipers and Sherwood Metros.

While these incidents made front page news nationally, they are only the tip of the iceberg. These were the slurs that were reported and acted upon.

Hockey’s whiteness both on and off the ice, and the systemic barriers faced by athletes of colour have maintained the homogenous appearance of the sport, and the culture, and systems in place to protect and support racism in sport still exist.

Throughout hockey history however, the presence of Asian Canadian hockey players has never faltered. Hockey existed as respite within Japanese Internment camps during World War II; Chinese Canadian teams barnstormed in cities like Calgary, Montreal, and Ottawa throughout the first half of the 1900s.

Today, it is stars like Nick Suzuki, whose grandparents were forcefully interned during World War II who are actively working to educate, and change the face of hockey. The game of hockey is for everyone, it is for Owen Kim and George Chin, it is for the Wakabayashi brothers, even if the leagues and systems that govern the sport still isolate and discriminate. Hockey however, is changing, and will continue to change as we continue these important conversations.