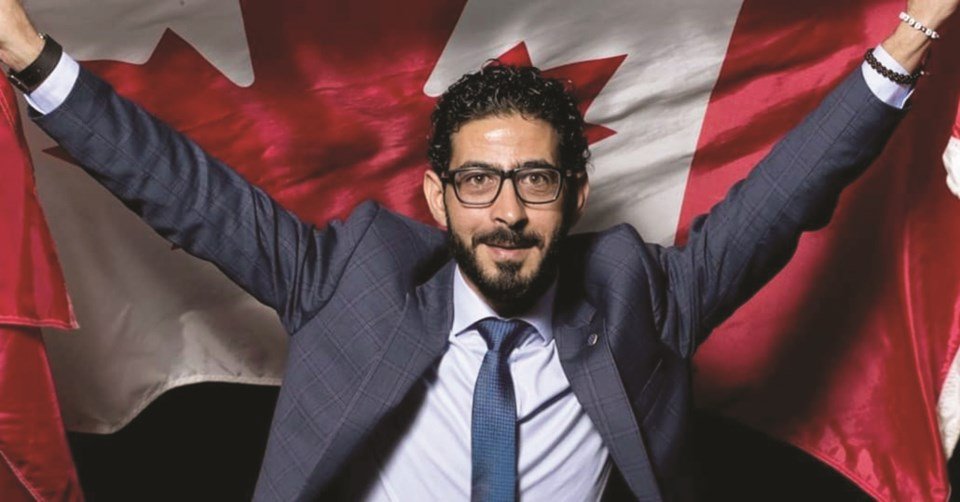 Perhaps life is mocking me again, or perhaps it is fate; most likely, it’s just a coincidence. But the only apple tree I’ve come across so far in my time in British Columbia is the one in my backyard.

Every morning, when I wake up and start making Turkish coffee and listening to music by the singer Fairuz – the same way I’d start my days back home – I look through my small kitchen window and there it is: an untidy tangle of branches with a few leaves and some fallen apples at its base. Without requiring much care or attention, my apple tree stands alone in my yard, quietly and peacefully belonging to the ground.

I came from a place where there were so many trees like this. My birth city of Al-Sweida, in Syria, is known as the city of apples and grapes. But while there is only one apple tree here, it brings me some joy to know that the same moon shines over the trees here and there – that we’re still under the same sky, the same air, the same sun. When I use the same eyes that I once used to look upon the Al-Sweida apple trees to gaze upon the one in my backyard, it feels like I can do the impossible, and be in Canada and in Syria at the same time.

I think about those trees, and that seemingly contradictory sense of being two things at once, when I think about Jan. 11 – the day I will swear an oath to officially become a Canadian citizen.

“You should be happy,” my friend told me at one point. “This will be the most important day of your life. You have waited so long to officially become a Canadian. Congratulations, you are one of us now. Oh – and don’t forget to buy a flag.”

Perhaps she is right. But if that was the case, what was I when I shovelled snow from my driveway for the first time, when I first tried skiing, maple syrup and poutine, and when I first noticed I was saying sorry and thank you countless times for no obvious reason? Was I not Canadian when I woke up at 5 a.m. to support Canada’s national men’s soccer team at the World Cup?

Yes, Jan. 11 will be important – it will make me Canadian. But it will also only make me more Canadian. Because for me, I was Canadian on the day an immigration officer from Canada visited me at the detention centre in Malaysia, and on the day my plane touched down at Vancouver International Airport. I was Canadian when I spent my first true winter up north, and when I joined the Canadian Red Cross, driving all across British Columbia to try to repay the society that once helped me.

Jan. 11 will be a beginning of a new life; it will also be a celebration of what I’ve already felt for more than four years. It will make me a Canadian, and it also will not. Both things can be true.

We refugees have two homes. There’s the home we gain at birth, the one we love and miss; it’s the one that holds our childhood memories, our families, our schools, our first crushes – and we want to see it safe, happy and prosperous. The second is the one that we choose, and chooses us: the home that is ours in the present and the future, the one that gave us the chance to find dignity, voice and value as individuals, the one that showed us hope when it welcomed us with open arms. I am so lucky that my second home is Canada. No one chooses to be a refugee, but I know that all refugees would choose to be Canadian if they could. Both things can be true.

For some, the Canadian flag is a symbol – one that allows people to travel without being questioned at airports, for instance. For others, it represents a better future for their children; it represents free education, universal health care or government support; it represents rights and obligations under a democracy.

There is, of course, no such thing as a perfect country. There are always struggles, difficulties and challenges; there are ups and downs, pros and cons, to my life here. Despite that, I am sure that the story I am going to tell my children one day is this: Once upon a time, there was a man with no hope, stuck in limbo. He was alone, cold, desperate, hopeless, powerless and voiceless – a man who stopped dreaming of a better life. Then, there was a country called Canada, and a people called Canadians. There was a red-and-white flag with a maple leaf on it. That made all the difference for this hopeless man.

Perhaps newcomers are destined to live between two worlds, and to wrestle with two different cultures. But perhaps our original home is not as far away as we think. Perhaps it lives within us, unified with our souls, staying where we stay while also coming with us when we leave. Perhaps our homes are wherever we’ve been, and where we are.

One thing, at least, is for sure: I don’t need a flag for Jan. 11, but I am definitely going to buy a big one. Both things can be true.