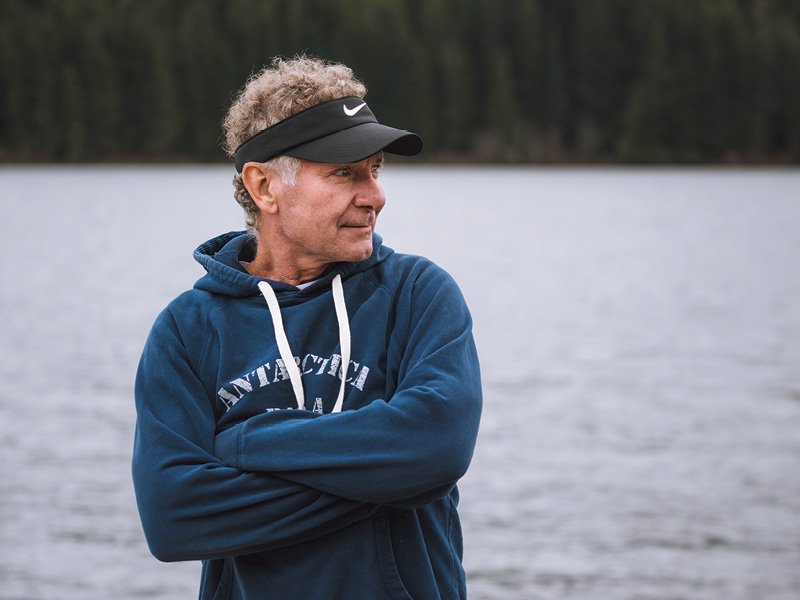 In his memoir, Flat Out in Pieces, Paul Suter relates, “Endurance athletes are a different breed – machines with no OFF button…I trained harder and harder, pushing my body to the limit of what it could tolerate (simply) because I wanted to beat that guy who sometimes beat me to the finish line… My mind, my arrogance and my desire to be the best clouded my judgment.”

“My mind, my arrogance and my desire to be the best clouded my judgment.”

The morning after his wedding, Paul, from Whistler, BC, completed a triathlon with his bride, Christine. He eventually competed at the IRONMAN World Championships in Kona, Hawaii, an experience that whetted his appetite for more; he set his sights on a masters-class podium finish.

When he suffered a serious concussion in a cross-country skiing accident, he shrugged it off as just the latest in a long series of head injuries dating back to childhood. Now training with three-time IRONMAN World Champion, Peter Reid, he intensified an already demanding training regimen, competing in three-and-a-half IRONMAN triathlons within six months.

Then, one morning shortly after completing a 50-kilometre ultra-marathon, he could not get out of bed. Paul Suter, the athlete, could no longer compete. Sleeping became nearly impossible and any physical movement made the symptoms worse. Months later, he could not even take his dog for a five-minute walk.

For the next seven years, Paul searched for both a cause and a cure for his condition. A naturopath diagnosed an adrenal crash, but he couldn’t get anyone to take that diagnosis seriously. Aided by his devoted wife, Christine, he consulted family doctors, sports medicine specialists, a sleep specialist, a psychologist, a chiropractor and a Chinese medical practitioner. He tried acupuncture, ultrasound, biofeedback, neurotherapy, hormone creams and yoga. When nothing helped he sank into a serious depression.

Sadly, as his physical and mental health deteriorated, so did his relationship with Christine. Paul understood better than anyone how essential sport was to her. Their relationship had centered on training and competing together from the very beginning. Now he was a bystander; resentment set in while he struggled with the loss of his own identity.

Paul turned a major corner when he began receiving nutritional IVs from a naturopath experienced in treating athletes. Then, when he read a magazine article about Overtraining Syndrome, he finally realized he wasn’t alone. Endurance athletes around the world are pushing their bodies without adequate rest. The resulting damage to the brain, endocrine and immune systems can be catastrophic and typically takes three years to restore.

Three years later, Paul continues to recover and now works to raise awareness about the dangers of overtraining. Most recently, he was Marathon Tours’ keynote speaker, sharing his story with 700 guests who were participating in the 2018 Berlin Marathon. And, after ten years on the sidelines, he pinned on a bib and is proud to report that he completed the race in just over five hours, a time that would once have devastated him. As he puts it, “I needed to let go of the idea of being an athlete to accept the person I am now and to understand that I am maybe much more than an athlete.”

FLAT OUT IN PIECES

Flat Out in Pieces: Trailer