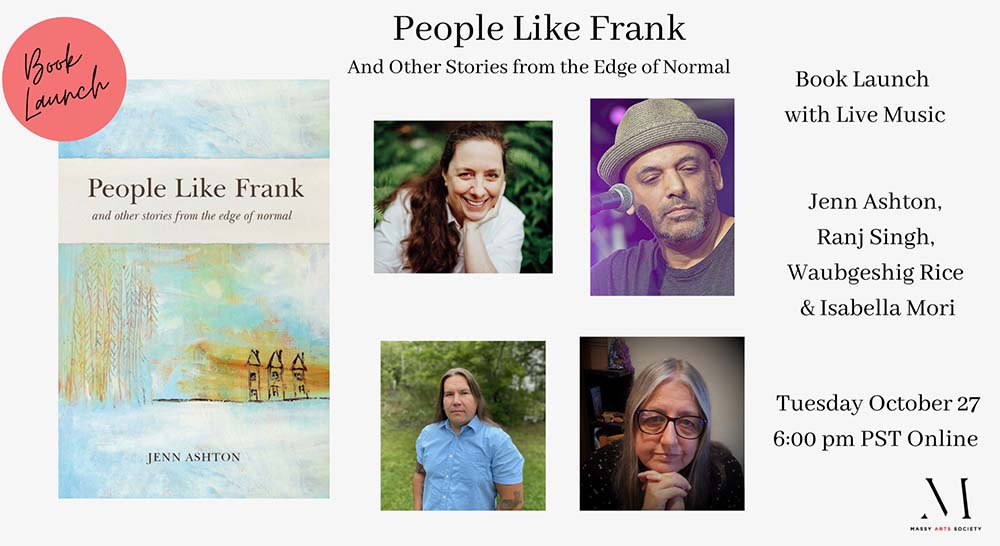 Book Launch: People Like Frank and Other Stories from the Edge of Normal

Author and artist Jenn Ashton launched  her new book, People Like Frank and other stories from the edge of normal, on Tuesday, October 27th at the Massy Arts Society

RANJIT “Ranj” SINGH makes music with a distinct Indian-Western flair that draws on the singer-songwriter and self-taught guitarist’s love for rock music and heartfelt lyrics. He refers to his unique blend of music as “Indo-Canadian Folk”. In the mid 80s, Ranj started his career performing with many folk-Punjabi and Hindi artists in the Vancouver area. In the 90’s he, along with his talented brothers, helped form the influential and critically acclaimed group Dal Dil Vog, where their unique style of bhangara/rock music led to tours throughout North America and India. After Dal Dil Vog disbanded, Ranj recorded two solo projects, Simple Man and Man Cold, and a third, Found A Way Home, with his band The Discriminators.

WAUBGESHIG RICE is an author and journalist from Wasauksing First Nation on Georgian Bay. He has written three fiction titles, and his short stories and essays have been published in numerous anthologies. His most recent novel, Moon of the Crusted Snow, was published in 2018 and became a national bestseller. He graduated from Ryerson University’s journalism program in 2002, and spent the bulk of his journalism career at CBC. He lives in Sudbury, Ontario with his wife and two sons.

ISABELLA MORI lives in Richmond and is the author of two books of and about poetry, including A bagful of haiku – 87 imperfections. Isabella writes poetry, short fiction, novels and nonfiction. Publications have been in places such as the 2019 anthology The Group Of Seven Reimagined. Isabella is the founder of Muriel’s Journey Poetry Prize, which celebrates loud, edgy, socially engaged poetry, and is a regular contributor to and occasional editor of “Family Connections”, a newsletter for families and supporters of people with mental health and substance use challenges. Isabella’s twitter handle is @moritherapy

You can watch a recording of Jenn’s book launch on Youtube.

Excerpts from People Like Frank Read by Jenn Ashton