Sea Shanties in the Time of Corona Virus

Sea Shanties in the Time of Corona Virus 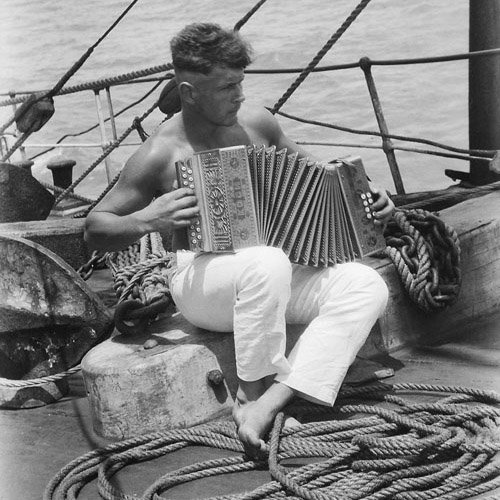 Author of Everyday Evil: Why Our World Is the Way It Is

SEA SHANTIES IN THE TIME OF CORONA VIRUS

What do Tik Tok, Netflix, Kermit the Frog, sweater-wearing men with deep throats, and those nearly two million people who, within five days in 2020, listened to musician Nathan Evans sing “The Wellerman” have in common? A taste for sea shanties.

And what are sea shanties? A young woman in the show Fisherman’s Friends (Netflix) flippantly defines it as “Rock and roll of 1750,” a definition that would certainly have puzzled eighteenth-century sailors. For them, a shanty was a working song, aligning the beat of the song to the gestures and rhythm required for many men to propel oars as one body, to hoist heavy sails in single motions, to smoothly ride the “donkey” and load cargo in unified effort—whatever the ship and whatever her identity (Navy, merchant service, whaler, pirate ship). Where a single man’s effort would have been vain, many arms working together did the job. Cooperation and coordination were key at sea, where life only obeyed the hierarchy and the elements. Known as the “wooden world,” seafaring was a singular and unique entity, harsh yet cohesive, where men’s voices soared as one with a freedom otherwise unknown to them.

A real song, with a melody, a theme, a chorus were not strictly necessary to regulate and unify seafaring activities and, indeed, very early versions often consisted in grunts uttered in unison, sometimes to the accompaniment of a violin near capstans or halliards. But the eighteenth century, followed by the naval victories of the Napoleonic Wars, saw an explosion of developed themes as shanties flourished on board. All dealt with what sailors loved (their ships, their women, the sea), what they feared (the sea again, the elements, the enemy, diseases, phantom ships), when they resented (the dreaded but unavoidable impressment, manic captains, greedy owners, the harsh discipline), what filled them with pride (their unique status, their ships yet again, victories in battle, good captains, prize money). As commerce expanded and Britannia truly ruled the waves, there was no lack of topics dwell in their perilous and lonely lives. As with the utmost stretching of their arms in physical work, one voice would have hardly been heard, but the united echoes of a whole crew’s chorus spoke of bonding, power, and strength.

Why this sudden interest in sea shanties of two centuries ago? Perhaps we need to look no further than the sense of a community facing similar dangers with common goals, the harshness of the times, the often expressed sentiment that “we are all in this together,” the reliance on others to do their duty so we can be protected (as we protect them by doing ours), the willingness to help our community, acknowledging that we all benefit for its wellbeing. Together we banged on saucepans at seven or eight o’clock at night all over the world, together we watch musicians on split television screens, together we stay masked and away. All are versions of the strength of coordinated action that seamen in the Age of Sail experienced so profoundly when they used a common voice in dangerous times.